The Center Console Molle Storage Panels were designed to add amazing versatility to any interior. Whether you are looking for a little more storage or you want an amazing way to mount accessories, this is the solution. This low profile design will not hinder your driving experience in any way, in fact it will allow you to reach and control all your digital devices better than ever.

I love these molle panels. I mean they are legitimately useful. The install wasn’t as easy as the video suggests, but since when is anything. Be creative and look how things are built and you’ll get em in just fine. Easy way to keep critical gear at hand and ready for immediate access.
Overall I give them a 10/10 as it fit exactly what I was expecting and installation isn’t that bad. 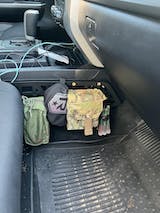 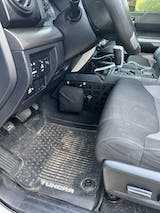 D
Dan Casey (Mentor, OH)
Not as easy to install as on the video

First off, there was no guidance on measuring to put the screws in and these were not easy to get a hold of the nylon locking nuts. The driver side was not too bad.
The passenger side was a total nightmare. Had to do much more disassembly of the console section to be able to fasten the nylon lock nuts. If installing the bridge at a later time, chances are it would not line up with the side pieces. It is sturdy however, and was very useful in hanging the CB radio by my right leg. In spite the lengthy install, I ordered the multi-panel for the passenger side and a fire extinguisher mount to be completely outfitted for our cross-country trip with the camper this summer.
I think the shape could be improved to make use of available space below it. A good portion is unusable since it is covered by the seats. Don't know about the glove box issue. Don't think it would be a problem. The passenger side does cover over the cubby hole recess but you could still put pencils or pens in there. Maybe this is what the disclaimer is saying, but it is definitely not a glove box.

Absolutely beast! Fantastic build quality and looks fantastic on my 2021 TRD. Thanks!!

The center console is everything I was expecting. Its a beautiful piece of work. I highly recommend. Now to the sort of portion. The install is a bitch. With no template for the best place to put you just guess and start drilling. Then comes the fun of the small nuts. Be prepared to take off more center console pieces than shown in video.

D
Dean Espinosa
Very happy with this, it's well built and will come in handy.

I was looking for something to strap items that usually float around my rig when on the road. I really just wanted one mole panel for the driver side but decided to get both sides and the bridge. Although... had I paid attention and seen that the glove box becomes unusable I would have not gotten the bridge, BUT now this it is all together I am very glad I did.

Regarding the bridge and glovebox: I spent some time going over what I use the glove box for: eating utensils, a couple dice and card games, napkins and extra masks and felt I could move that stuff. So, I pulled everything and put them in a couple Husky 12" Waterproof Storage Bins that I slid under the drivers seat. This is an OK work around.

After deciding to keep the bridge, and before it was delivered, I planned on modifying it so that the glove box would work. Once it came in though, I felt it was so well build and nice looking I decided I could just stick with it as is. I do think Rago can make a modified bridge so the glovebox would work. It would shift the passenger side of the bridge over a bit, loosing bolt point but it I think that is worth getting that extra storage back. My drone usually sits under the driver seat so now I need to find a place for that on the road.

About the installation: there is a video that is OK. It makes it look much easier than it was. I suggest you get a pair of needle nose vice grips to hold some of the nuts and washers because my hand was unable to get at a couple of bolts. I also suggest you request a couple of extra washers and nut or two. I lost a couple and had to drive around town to find the appropriate fasteners.

The video also doesn’t clarify how one would line the panels up so the bridge is parallel to the dash. Also, it doesn’t suggest how far forward or back you should set the panels. I put a speed square at the break from the rear cupholder trim and the dash trim, put some tape on the side of the console and drew a line down. I then lined up the upper front attachment hole with that line and the top of the panel to the bottom of that cupholder trim.

That was OK but the passenger side upper-rear attachment point was unusable. There is some thing back behind it. I found it impossible to get a washer and bolt on. So that corner is missing a bolt. If I set the panels about 1-1.5” forward of the line on the tape I think it might have worked but then the bridge and possibly the passenger panel would be against the dash and glove box damaging them. So, not sure how to correct that. I think next time I do a deep clean and pull the console apart, I’ll drill another attachment point below this and add the bolt.